You are here: Home / Uncategorized / Summer Intensives a Requirement for Most Aspiring Ballet Dancers 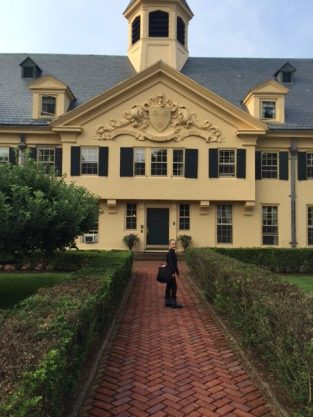 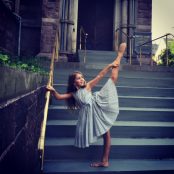 Since a toddler, Amanda Lily Kountanis had been preparing for this day; the day she crossed the threshold of the prestigious and world renowned Bolshoi Ballet Academy Summer Intensive. Breathing in a bundle nerves, she bravely embraced the unknown world that lay ahead.

For those with dreams of becoming a professional ballet dancer, attending summer ballet intensives is a necessary part of the story for most dancers. Armed with a firm foundational background from their home studios, thousands of young dancers worldwide expand their horizons and dig deeper into their art, adding one more layer of experience that could eventually play out for them in a career on stage.

Amanda Lily is one of those thousands of girls, embracing these same ballet dreams.

And as most parents realize, these dreams often start to become apparent in their children at a young age. Amanda Lily’s mom remembers it clearly.

“Although it isn’t much of a money-making path, ballet is the path for Amanda Lily. She has such a passion for the art of ballet, and every aspect of it. She loves music and choreography. She currently enjoys listening to music and lyrics and choreographing interpretations of what she hears. She loves costuming. At a young age, she would dress her dolls in different costumes and hairstyles and do ‘The Nutcracker.’ She loves the details. She loves everything about dance,” said Cynthia Kountanis, Amanda Lily’s mother.

“Her long term goals are to become a professional ballerina and then retire from dancing and become a dance instructor or ballet mistress herself,” Kountanis added.

For the career minded, taking the big step into the summer intensive experience is the first barrier to entry that most dancers experience. It isn’t a case of just signing your child up for a summer camp. Every winter, dancers with big dreams from throughout the world audition for the scarcely few spots at just a handful of prestigious schools in the United States.

For Amanda Lily, securing a spot at the Bolshoi Ballet Academy, with a scholarship, no less, was an incredible feat.

“When we got the call that she had been accepted and with a scholarship, we were thrilled,” said Kountanis.

For Amanda Lily, that also meant it was her time to face those jitters that every child experiences when going to summer camp.

“The first day, I was really shy around the other girls, and nervous when the instructors came around me. I was also nervous because I hadn’t made friends yet. By day two, I had made friends and started talking with a couple of girls. We were like peas in a pod, and I was feeling more comfortable,” said Amanda Lily.

And before she knew it, she was feeling at home.

“Pretty soon, I noticed that the instructors liked my way of dancing, and it helped my confidence when they were around me. By the last week, I knew every girl in my group, and was feeling stronger and stronger in my dancing,”

By the end of the three-week program, situated in the in the idyllic setting at a nearly century-old boarding school in Middlebury, Connecticut, Amanda Lily realized her experience had blown through even her own expectations.

“The experience was better than I expected. I cried when leaving because I knew I would miss everything about Bolshoi. I miss the teachers, friends and amount of dancing. I’m still in contact with most of the friends I made during my time there. I would recommend this dance intensive to others. I grew as a dancer and had an amazing experience.”

And for Amanda Lily’s mom, the eight years of preparation at the Mount Dora School of Ballet proved priceless.

“I feel forever grateful to Mrs Wheeler and the staff at MDSB, because Amanda Lily was more than prepared for her experience at Bolshoi’s Summer Intensive. She auditioned at 10 years old, and the entire process had me, as her mom, very nervous,” Kountanis said.

“Once she arrived, the instructors at Bolshoi were fond of her, and her MDSB training, technique and work ethic. She was able to build on her foundation of training she received at MDSB, and see for herself how hard work and dedication truly pay off. I was able to relax and watch my girl thrive in the environment of Bolshoi, because of the support of Mrs. Wheeler and the staff at MDSB.”

To touch, to move, to inspire. This is the true gift of dance.

Join Our Email List
For Email Marketing you can trust.

Ballet technique is the foundation of our curriculum. Our faculty follows a syllabus steeped in the Russian tradition. The school has three distinct divisions. Our Children’s Division is for girls and boys ages 3 to 7 and our Classical Ballet Division is for girls and boys 8 to 19. We also have an Open Division for students 8 and up with classes in Character Dance, and Contemporary. Performing is a crucial component of the overall dance education. The … END_OF_DOCUMENT_TOKEN_TO_BE_REPLACED

There are no upcoming events at this time.

Placement Informtaion Children's Division: Students in the Children’s Division, ages 3 through 7, are placed by age as of September 1. Classical Ballet Division: Students new to Mount Dora School of Ballet wishing to register for the Classical Ballet Division, ages 8 through 18, are placed properly through a placement class. For class placement inquiries or for additional information, contact us at: 4280 N Hwy 19A Suite 4, Mount Dora, FL 32757 (352) … END_OF_DOCUMENT_TOKEN_TO_BE_REPLACED

Join Our Email List
For Email Marketing you can trust.